THE FACTORY OF THE PAST, poems by Mariana Marin, translated from the Romanian by Adam J. Sorkin and Daniela Hurezanu (35 pp. paper. staple bound. Toad Press, 2008, $5.00). LIMITED AVAILIBILITY


MERCURY PROJECT, poems by Grzegorz Wroblewski, translated from the Polish by Adam Zdrodowski (18 pp. paper. staple-bound. Cover design based on a painting by the author. Toad Press, 2008 $5.00).


OF THE SAME MIND, by Johann Hjalmarsson, translated from the Icelandic by C.M.Burawa (41 pp. paper. staple-bound. cover photograph by Jora Johannsdottir, Toad Press 2005, $5.00). SOLD OUT


TWENTY-FIVE AND ONE POEMS, by Tristan Tzara, translated from the French by Nick Moudry (39pp. paper. staple-bound. Cover design by Becky Rosen, Toad Press 2004, $5.00). SOLD OUT


You can buy most of our chapbooks here. Some are also available from The Lost Bookshelf and Quimby's . Or you can email us, and we'll tell you more ways to buy our books.


If you are a teacher or librarian and want to learn about our special deals, or if you can't find the book you're looking for from the links above, please email us at toadpress(at)hotmail(dot)com. 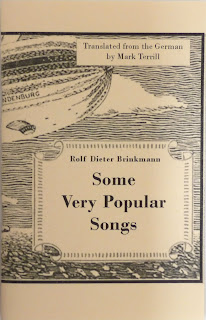 translated from the German by Mark Terrill

You can purchase a copy of Some Very Popular Songs here
& add the book to your Goodreads list, here.

Rolf Dieter Brinkmann was born in Vechta, Germany, on April 16th, 1940, in the midst of World War II, and died on April 23rd, 1975, in London, England, after being struck by a hit-and-run driver while crossing the street to enter a pub. Brinkmann had been in London for the Cambridge Poetry Festival, where he read with John Ashbery, Ed Dorn, and Lee Harwood. In May, 1975, just a few weeks after his death, Brinkmann’s seminal, parameter-expanding poetry collection Westwärts 1 & 2 appeared, which was posthumously awarded the prestigious Petrarca Prize.

"Some Very Popular Songs," is one of several longer poems in Westwärts 1 & 2. The poem moves forward and backward through time and space, and shows clearly how Brinkmann was becoming more politically engaged in the course of his development as a writer. Presenting Adolf Hitler as a human being, with his love affair with Eva Braun, was a very radical move for a German writer in the politically turbulent seventies in West Germany. "Some Very Popular Songs" incorporates many of Brinkmann's signature traits; social/political criticism, intense self-scrutiny, taboo-breaking, travel diaries reworked as poetry, and his trademark trenchant humor.


Last night I was thinking about the love
story of Adolf Hitler.
I saw the permanent waves in the hair
of Eva Braun. How many German women

today look like the smile of
Eva Braun. The photos reproduce themselves.
I was not, I know, born in a
photograph. Snow fell in April,

as I was born, shrouded in the
ornamental cloth of the baptism ritual.
The war, I don't understand what that
is, which language is where?

& Terrill's full-length Brinkmann translation, An Unchanging Blue, is available here, from Parlor Press.
Posted by gk at 10:22 AM

The Baden-Baden Lesson Play on Acquiscence 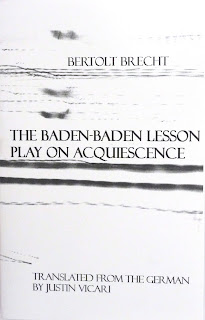 THE BADEN-BADEN LESSON PLAY ON ACQUIESCENCE

translated from the German by Justin Vicari

You can purchase a copy of The Baden-Baden Lesson Play on Aquiescence here
& add this book to your Goodreads list, here.

One of the most influential playwrights of the 20th century, BERTOLT BRECHT was born in Augsburg, Germany, in 1898. He conceived a style called Epic Theater, using didactic placards, songs, slogans, projections, masks, and other devices to engage the audience in thinking about his increasingly political subject matter. In 1927, he collaborated with composer Kurt Weill on The Threepenny Opera. Extremely popular, the work was both harshly cynical and oddly romantic, with distinct undercurrents of anti-capitalist satire.

In 1933, Brecht left Nazi Germany and moved to Paris, where he and Weill staged their final collaboration, The Seven Deadly Sins. Brecht soon emigrated to Los Angeles to work as a screenwriter, but he was largely unsuccessful and summarized his Hollywood years in a short poem: “Every morning, to earn my bread, / I go to the market where lies are bought and sold. / I take my place among the sellers.” Nevertheless, he wrote some of his best plays during his period of exile, including Mother Courage and Her Children and Galileo.
After being targeted by the House Un-American Activities Committee in 1947, Brecht chose to return to East Berlin, where he continued to write and stage plays until his death in 1956. 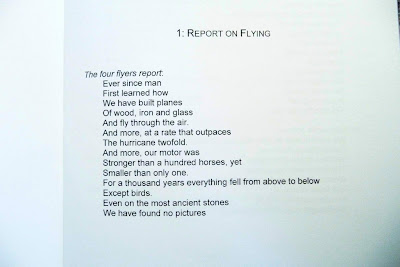