The Factory of the Past 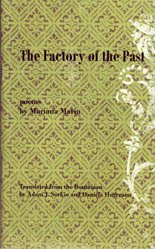 THE FACTORY OF THE PAST

translated from the Romanian by Adam J. Sorkin and Daniela Hurezanu

You can purchase a copy of The Factory of the Past here
& add the book to your Goodreads list, here.

MARIANA MARIN was considered one of Romania’s most important poets at the time she died at the age of forty-seven in 2003. During the Ceausescu dictatorship, Marin was one of the very few intellectuals who dared to speak up against the regime. As a consequence, she was silenced for much of the 1980s—“an unpublishable poet, a heavy cross,” as she tells us. Her uncompromising attitude can be seen in her poems even when she is not directly political, as is the case with many of her later poems, such as the ones that appear in this book. But during dictatorships everything becomes political, and even her descriptions of the quotidian are pained records of a historical time when private life cannot be separated from the political. Similarly, her “Love Poems” are bitter and unsentimental, not unlike her “Elegies.” For Marin, as for other Eastern European writers, happiness was a foreign country.

Mariana Marin published five books of poems in Romanian. The poems here are from her 1999 collection, The Mutilation of the Artist as a Young Woman, which won a number of major prizes. In 2002, the Romanian Writers Museum Publishing House (Bucharest) issued a career retrospective, The Dowry of Gold, including a handful of new, previously uncollected poems—her last, as it turned out. A selection of Marin’s poems, Paper Children, was published in 2006 (Brooklyn: Ugly Duckling Presse).


Do you remember
when you used to play Apocalypse with me?
When you counted my days,
so very few,
on the marbles that never brought luck?

Why do you keep whining?
My little fortune of illusions
lies crushed in the dust
with the muses tricked out in motley,
feasting on dead swans.
Now it’s your turn to count the Beast’s heads.