Fernando de Rojas Asleep on His Own Hand 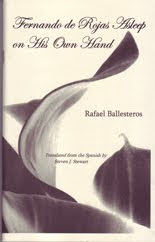 FERNANDO DE ROJAS ASLEEP ON HIS OWN HAND

A book of aphorisms by Rafael Ballesteros
translated from the Spanish by Steven J. Stewart

You can purchase a copy of Fernando de Rojas Asleep on his own Hand here
& add this book to your Goodreads list, here.
About:
RAFAEL BALLESTEROS (1938-) lives in the Mediterranean city of Málaga. He was a member of Spain’s national legislature and helped draft its post-Franco constitution. Ballesteros is the author of numerous works of poetry and criticism, including the collection of poems Los dominios de la emoción which was released in 2003 by Pre-textos (Valencia, Spain). In 2010 he won the Premio Andalucía de la Críticia for his novel La Muerte Tiene la Cara Azul (Death Has a Blue Face). Ballesteros is also the founder of Editorial Veramar, a publisher of experimental literature from Spain.


They asked me, In truth, who are the most harmful men
in these realms? I answered immediately, Those who speak to us of eternity.
Posted by gk at 6:06 PM