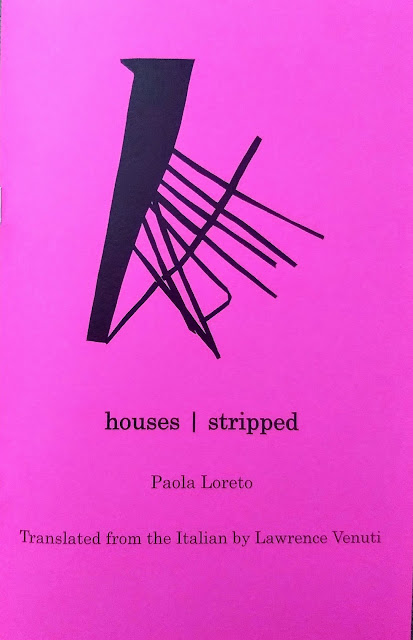 poems in Italian and English

cover image is a chine-collé collage by Carol Keller

You can purchase a copy of houses | stripped here.

Born in Bergamo, Paola Loreto is currently based in Milan. She is an associate professor in the Department of Foreign Languages and Literatures at the University of Milan, where she teaches American literature. She has published five collections of poems, including In quota (2012) and case | spogliamenti (2016), and has won a number of national awards, including the Premio Antonio Fogazzaro, the Premio Benedetto Croce, and the Premio Umbertide. Among her  publications are book-length studies of Emily Dickinson, Robert Frost, and Derek Walcott. Her translations into Italian include the work of Richard Wilbur, A. R. Ammons, Philip Levine, Charles Simic, and Amy Newman. She has held a Copeland Fellowship at Amherst College and been appointed poet in residence at the Centre de Poésie et Traduction of the Fondation Royaumont in Paris.

Lawrence Venuti translates from Italian, French, and Catalan. His translations include Antonia Pozzi’s Breath: Poems and Letters (2002), the anthology Italy: A Traveler’s Literary Companion (2003), Massimo Carlotto’s crime novel The Goodbye Kiss (2006), and J. Rodolfo Wilcock’s collection of real and imaginary biographies, The Temple of Iconoclasts (2014). He won the Robert Fagles Translation Prize for his version of Ernest Farrés’s Edward Hopper: Poems (2009). He is the author, most recently, of Translation Changes Everything: Theory and Practice (2013). 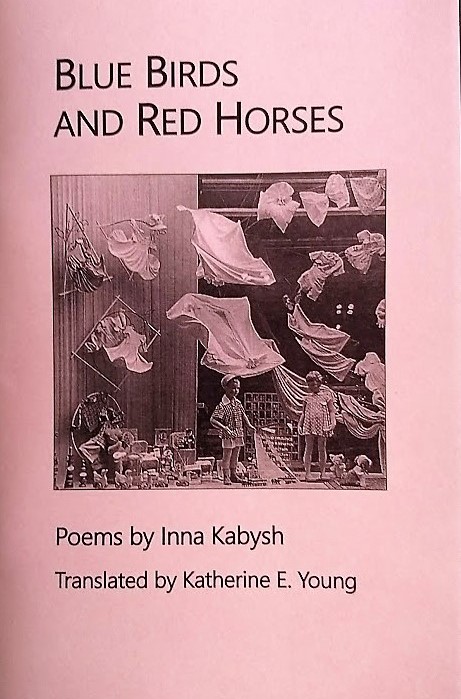 cover image is a detail from a photograph of a Children's World department store in Moscow, taken during the Soviet period.

You can purchase a copy of Blue Birds and Red Horses here.

Inna Kabysh is the author of seven collections of poetry. She was born in Moscow in 1963. Her first collection, Lichnye trudnosti, was awarded the 1996 Pushkin Prize of the Alfred Toepfer Fund (Hamburg, Germany); she has also won the 2005 Anton Delwig Prize; the 2014 Moskovsky schet Prize; the 2016 Anna Akhmatova Prize; and the 2016 Deti Ra Prize. In 2011 Katherine E. Young’s translation of Kabysh’s poem “Yuri Gagarin was a great Russian poet” was awarded joint third prize in the Joseph Brodsky-Stephen Spender international translation competition; individual poems have appeared in English translation in Tupelo Quarterly, Trafika Europe, Hayden’s Ferry Review, Subtropics, and many others. A digital chapbook for the iPad, Two Poems, appeared in 2014. Several of Kabysh’s poems have been made into short films by Russian and American directors; many have been set to music. Kabysh currently lives and teaches in Moscow.


Poet and translator Katherine E. Young is the author of Day of the Border Guards, 2014 Miller Williams Arkansas Poetry Prize finalist, and two chapbooks. Her poems have appeared in Prairie Schooner, The Iowa Review, Subtropics, and many others. Young is also the translator of Farewell, Aylis by Azerbaijani political prisoner Akram Aylisli and Two Poems by Inna Kabysh. Her translations of Russian and   Russophone authors have won international awards and been widely published in such venues as Words without Borders, Asymptote, The Penguin Book of Russian Poetry, Words for War: New Poems from Ukraine, and 100 стихотворений о Москве: Антология (100 Poems about Moscow: an Anthology), winner of the 2017 Books of Russia award in Poetry. Young was named a 2017 National Endowment for the Arts translation fellow and currently serves as the inaugural Poet Laureate for Arlington, Virginia.

Read "Cat and Mouse," a poem included in Blue Birds and Red Horses, online in Trafika Europe, and visit Katherine E. Young's site for more information about her translations on Inna Kabysh.