translated from the Spanish 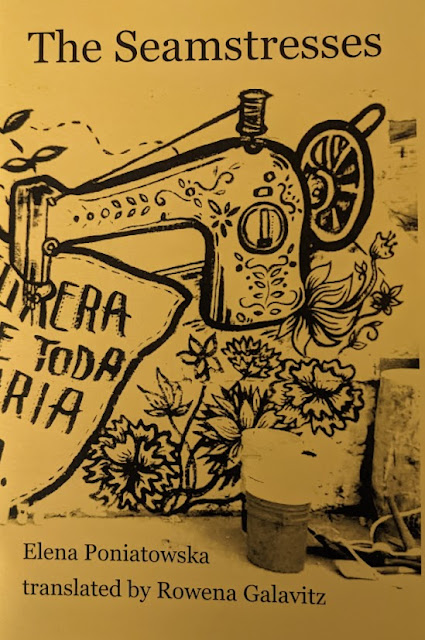 You can purchase a copy of The Seamstresses from Veliz Books.

Elena Poniatowska has lived most of her life in Mexico City, where she works as a writer and journalist. Writing in a variety of literary genres, Poniatowska has composed over 40 works documenting the history of women and the oppressed. Her most recognized novels include La noche de Tlateloloco, Nada, nadie: las voces del temblor, and Tinísima, all of which have been translated into English. Nada, nadie gives an account, in what has been called “testimonial polyphony,” of the 1985 Mexico City earthquake. She has won numerous literary prizes, including the prestigious Cervantes Award, and she has received honorary doctoral degrees from over a dozen universities, among them, the New School for Social Research.

A former resident of Mexico City, Rowena Galavitz has translated Latin American art criticism, short stories, and poems, including the work of Pura López Colomé, Jair Cortés, Araceli Mancilla, and Víctor Vásquez Quintas. In 2018 she won runner-up for the World Literature Today Translation Prize for her translation of Paula Ilabaca Núñez’s La ciudad lucía. She is currently studying for a certificate in literary translation and a dual master’s degree in religious studies at Indiana University Bloomington. In her graduate studies, Galavitz focuses on Spanish-speaking convent writers of the sixteenth and seventeenth centuries. Rowena is presently translating an award-winning novel by a contemporary Mexican writer.
Posted by gk at 7:30 AM 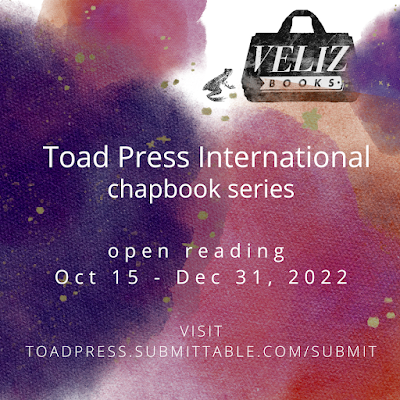 Submissions for the 2023 Toad Press International chapbook series are now open, and we can't wait to read your translations!
Review our Submission Information and FAQs for more details. When you're ready, send us your chapbook manuscript via Submittable. We'll be open for submissions through December 31, 2022, and we aim to make our choices for the 2023 series (publication in summer/fall 2023) by early February.
We invite you to submit for free, choose to pay a $6 submission fee, or purchase a chapbook from our impressive catalog when you submit. Don't forget, you can always purchase Toad Press titles, book bundles, or Veliz titles from the Veliz Books store!
When you're ready, head to Submittable and send us your work.
Posted by gk at 11:26 AM

In the Gloom on the Left

In the Gloom on the Left

translated from the French 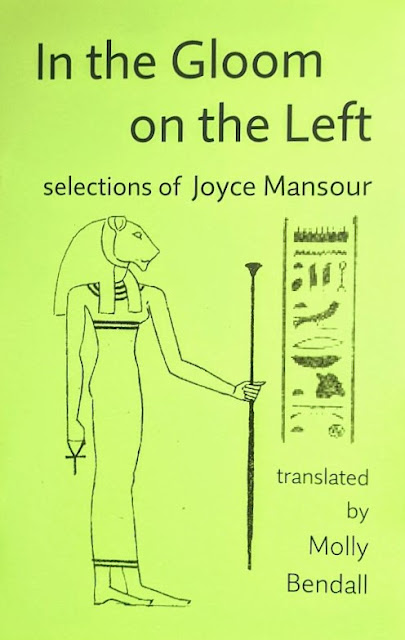 You can purchase a copy of In the Gloom on the Left from Veliz Books.
Joyce Mansour (1928-1986), of Egyptian origin, wrote primarily in French and was associated with the Surrealist movement. She published over a dozen collections of poetry, from 1953 through the 1980s. Her poems combine a feral eroticism along with a sly sense of humor, bringing a defiant new female voice to the latter stages of the Surrealist scene.
Molly Bendall is the author of five collections of poetry, including Watchful from Omnidawn Press and Under the Quick from Parlor Press. Omnidawn will also be publishing her next collection, Turncoat. Recent poems and reviews have appeared in Lana Turner, New American Writing, Tupelo Quarterly, Volt, LA Review of Books, and other journals. She teaches English and Creative Writing at the University of Southern California. 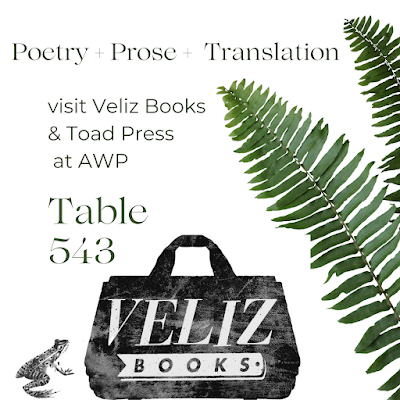 We're so excited to be *officially* going to AWP for the first time! Toad Press chapbooks will be on display and for sale at the AWP 2022 Conference Bookfair, March 23-26, in Philadelphia, PA.

Veliz Books and Toad Press will be at Table 543. We'll have some great specials, deals, and swag! Stop by to chat and buy some books! 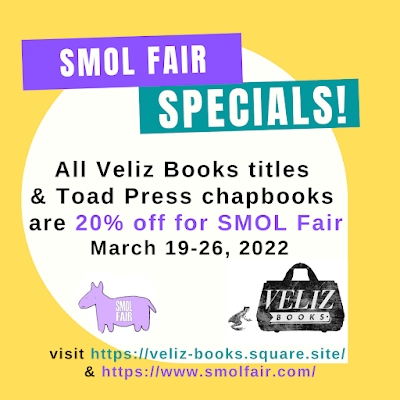 We are excited to participate in SMOL Fair, a free online book fair, March 19-26, 2022! Toad Press + Veliz Books will have some super #SMOLFair deals, and you can join the fun/enter to win small press giveaways! More: https://www.smolfair.com/about

We'll be giving away some great chapbooks through SMOL Fair (For a chance to win, follow SMOL Fair on their social media channels)!

And, you can take advantage of our 2-for-$10 SMOLFair chapbook deal on Submittable, or buy chapbooks and books for 20% off on the Veliz Books page! 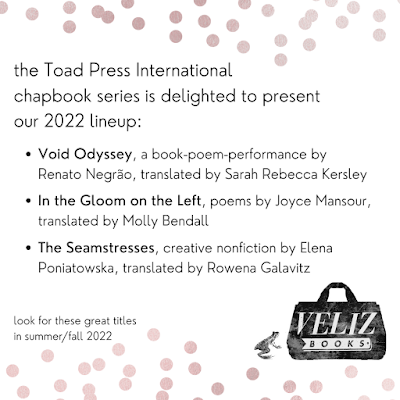 We are so excited to share our 2022 lineup! We'll be publishing three excellent translations this year:

Thanks to all who shared your work with us this year during our annual open reading period -- we loved reading all the submissions we received!

Stay tuned, and look for these new titles in summer/fall 2022 --