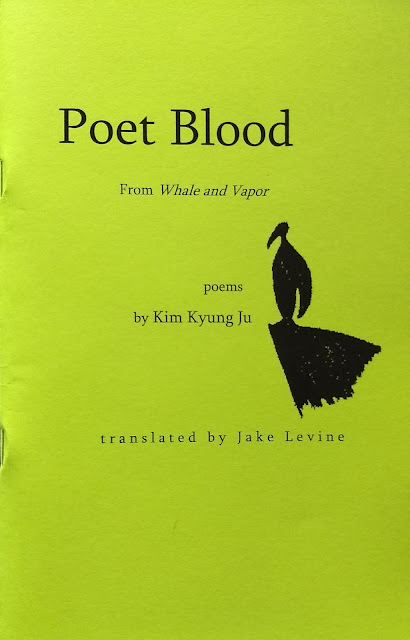 cover image courtesy of the author


You can purchase a copy of Poet Blood here.

Kim Kyung Ju was born in space. He arrived on earth in the late 1970s in Korea. He stayed there and wrote poems and some say he became the most important poet of his generation. He won the Kim Soo Young prize and a whole bunch of other prizes. He was blacklisted by the government though, so sometimes he writes using a pen name.

Jake Levine ended up in Korea and started translating poems there. Which is strange. There is no logic or reason. It was just something to do, so he did it. Kim Kyung Ju liked radiohead and he likes radiohead and they met at the radiohead fan club after Kim Kyung Ju translated Radiohead philosophy. He misses Tucson and his family at Spork Press.

"i was so enthralled and puzzled. i was terrified and brave. i’d close the book and open it. i opened it more than i closed it. for me, at times, it was more important than anything else and i’d delay life just to read it a fifth time.
i liked it when reindeer crawled across my lips the most." -John Thompson 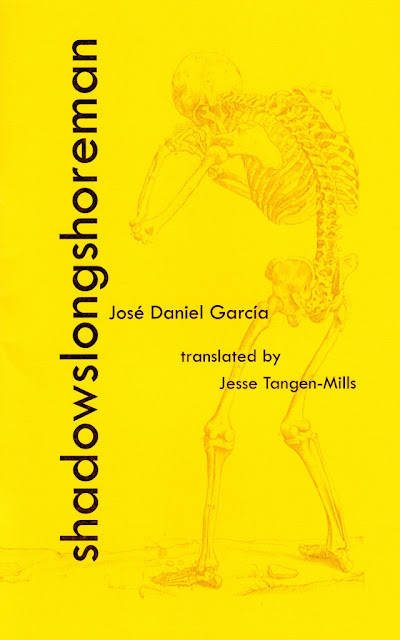 You can purchase a copy of shadowslongshoreman here

José Daniel García was born in Córdoba, Spain in 1979. With his first book, El sueño del monóxido (DVD, 2006), García won the Andalucía Youth Poetry Award. His second collection, Coma (Hiperión, 2008), was awarded the prestigious Hyperion Prize. The cannibal notebook Estibador de sombras (Cangrejo Pistolero Ediciones) was released in 2010.  From 2008-2010, García was a fellow in the iconic Residencia de Estudiantes-CSIC in Madrid. Last year he published his first novel, Fundido a rojo (ediciones En huida, 2016). Included in numerous national and foreign anthologies, his poems have been translated into Italian, Danish and German.

Jesse Tangen-Mills was born in Manhattan, New York. His chapbook of prose poems Alienating Space was released by Publishing Genius. He has written for various anglophone magazines and journals including Guernica, The Believer, and The Times Literary Supplement. His translations have appeared in Letras Libres, Spoila and MAYDAY (forthcoming). He lives in Bogotá, Colombia, with his family. 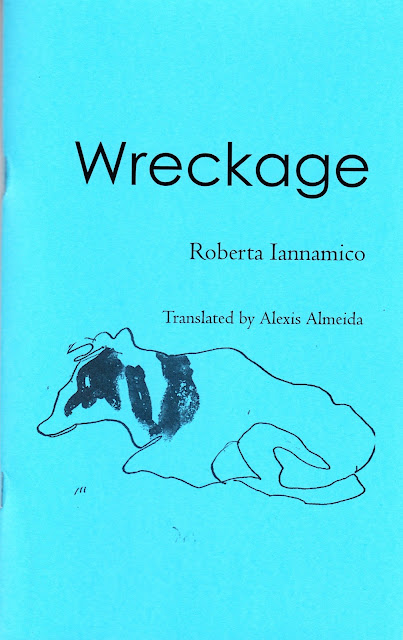 cover image based on the drawing "Cow II" by Arthur Dove

You can purchase a copy of Wreckage here

+ read a few of the poems in Wreckage, first published in Quarterly West, here

+ read more poems and a short review in Today's Book of Poetry, here

Alexis Almeida grew up in Chicago. Her poems and translations have appeared or are forthcoming Gulf Coast, The Brooklyn Rail, Prelude, TYPO, Dusie, and elsewhere. She is an assistant editor at Asymptote and a contributing editor at The Elephants. Her chapbook of poems, Half Shine, is recently out from Dancing Girl Press, and her translation of Florencia Castellano's Propiedades vigiladas [Monitored Properties] is recently out from Ugly Duckling Presse. She has received fellowships and residencies for Yaddo and the University of Colorado, where she completed her MFA. She recently spent the year living in Buenos Aires on a Fulbright research grant, where she has been compiling and co-translating an anthology of contemporary female poets living in Argentina.

We're working on our 2017 titles and will have some beautiful chapbooks to show you very soon! For now, though, you can go behind-the-scenes with Toad Press by reading our interview as part of Entropy Magazine's Small Press Database: https://entropymag.org/toad-press/ Thanks to all who submitted work during our  open reading period -- it was a pleasure to read the amazing translations you sent, and your great work made our decisions tremendously difficult.

We're happy to share that we'll have three wonderful titles to share with you in late summer / fall 2017.
.
Look for: