The Cheapest France in Town

from The Cheapest France in Town

translated from the Korean 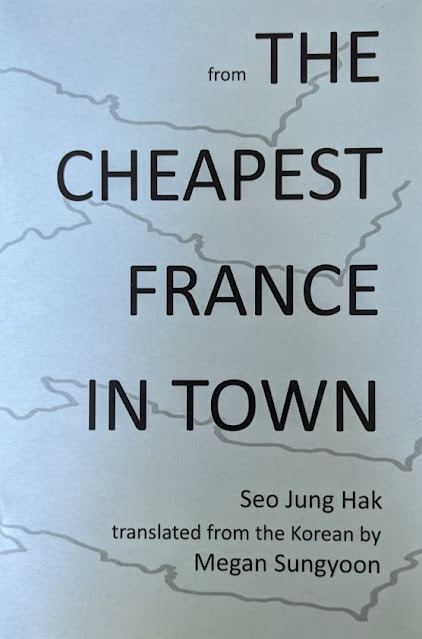 You can purchase a copy of The Cheapest France in Town here.
Seo Jung Hak was born in Seoul and graduated from Seoul Institute of the Arts’ Creative Writing program. Seo debuted in the Korean literary scene by publishing four poems including “은신처” (“Hideout”) in the Winter 1995 issue of 문학과 사회 (Literature and Society). His first book, 모험의 왕과 코코넛의 귀족들  (The King of Adventure and Aristocrats of Coconut) was published in 1998. 동네에서 제일 싼 프랑스  (The Cheapest France in Town) is his second book, published in 2017.
Megan Sungyoon translates between languages and across disciplines. Sungyoon’s efforts have appeared in Asymptote, Columbia Journal, The Margins (Asian American Writers’ Workshop), and SAND Journal, among others. As of 2020, Sungyoon lives a street away from Seoul, bordering the United States.

Read--and listen to--a couple poems from The Cheapest France in Town at Asymptote, where they were published earlier this year. Sungyoon writes in her translator's note, "The Cheapest encourages misreading. With its subtly unconventional uses of punctuation, plays with homonyms/homophones, and distorted subjecthood, The Cheapest is rather disinterested in identifying itself with a certain nation-state. A Korean reader may argue the poems are unmistakably Korean, but what is Korean, anyways?"